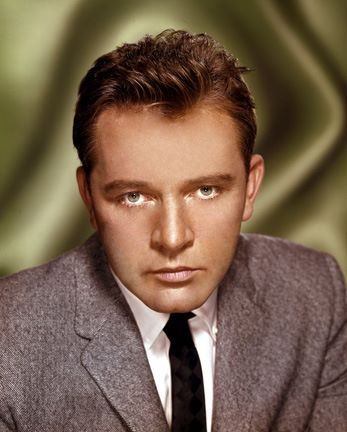 Probably best-remembered for his turbulent personal life with Elizabeth Taylor (whom he married twice), Richard Burton was nonetheless also regarded as an often brilliant British actor of the post-WWII period.

Burton was born Richard Walter Jenkins in 1925 into a Welsh (Cymraeg)-speaking family in Pontrhydyfen to Edith Maude (Thomas) and Richard Walter Jenkins, a coal miner. The twelfth of thirteen children, his mother died while he was a toddler and his father later abandoned the family, leaving him to be raised by an elder sister, Cecilia. An avid fan of Shakespeare, poetry and reading, he once said "home is where the books are". He received a scholarship to Oxford University to study acting and made his first stage appearance in 1944.

His first film appearances were in routine British movies such as Woman of Dolwyn(1949), Waterfront Women (1950) and Green Grow the Rushes (1951). Then he started to appear in Hollywood movies such as My Cousin Rachel (1952), The Robe (1953) and Alexander the Great (1956), added to this he was also spending considerable time in stage productions, both in the UK and USA, often to splendid reviews. The late 1950s was an exciting and inventive time in UK cinema, often referred to as the "British New Wave", and Burton was right in the thick of things, and showcased a sensational performance in Look Back in Anger (1959). He also appeared with a cavalcade of international stars in the World War II magnum opus The Longest Day (1962), and then onto arguably his most "notorious" role as that of Marc Antony opposite Elizabeth Taylor in the hugely expensive Cleopatra (1963). This was, of course, the film that kick-started their fiery and passionate romance (plus two marriages), and the two of them appeared in several productions over the next few years including The V.I.P.s (1963), The Sandpiper (1965), the dynamic Who's Afraid of Virginia Woolf? (1966) and The Taming of the Shrew (1967), as well as box office flops like The Comedians (1967). Burton did better when he was off on his own giving higher caliber performances, such as those in Becket (1964), the film adaptation of the Tennessee Williams play The Night of the Iguana (1964), the brilliant espionage thriller The Spy Who Came In from the Cold (1965) and alongside Clint Eastwood in the World War II action adventure film Where Eagles Dare (1968).

His audience appeal began to decline somewhat by the end of the 1960s as fans turned to younger, more virile male stars, however Burton was superb in Anne of the Thousand Days (1969) as King Henry VIII, he put on a reasonable show in the boring Raid on Rommel (1971), was over the top in the awful Villain (1971), gave sleepwalking performances in Hammersmith Is Out (1972) and Bluebeard (1972), and was wildly miscast in the ludicrous The Assassination of Trotsky (1972).

By the early 1970s, quality male lead roles were definitely going to other stars, and Burton found himself appearing in some movies of dubious quality, just to pay the bills and support family, including Divorce His - Divorce Hers (1973) (his last on-screen appearance with Taylor), The Klansman (1974), Brief Encounter (1974), Jackpot (1974) (which was never completed) and Exorcist II: The Heretic (1977). However, he won another Oscar nomination for his excellent performance as a concerned psychiatrist in Equus (1977). He appeared with fellow acting icons Richard Harris and Roger Moore in The Wild Geese (1978) about mercenaries in South Africa. While the film had a modest initial run, over the past thirty-five years it has picked up quite a cult following. His final performances were as the wily inquisitor "O'Brien" in the most recent film version of George Orwell's dystopian 1984 (1984), in which he won good reviews, and in the TV mini series Ellis Island (1984). He passed away on August 5, 1984 in Celigny, Switzerland from a cerebral hemorrhage.